Among the amendments put forth by the CDP Black Caucus and adopted by delegates at the Party’s state convention is language calling on Democrats to “support all public school options that provide the parents and guardians of Black or African American, American Indian and Alaskan Native students access to high quality educational alternatives to close achievement gaps.”  The Caucus also won language to “work to increase the percentage of Black mothers who receive prenatal care and to decrease Black infant and maternal mortality.”

The CDP Black Caucus sought changes to the CDP platform because the 2020 platform excluded the unique and important needs of Black children.

In a statement, the CDP Black Caucus thanked the CDP delegates, calling the newly adopted platform, “a significant step towards rectifying the core values of the Democratic Party — equality, opportunity, justice, and inclusivity for all — with the reality that Black students still face today.” The new platform will stay in place until 2024.

The CDP Black Caucus thanked Party delegates for including changes in the 2022 California Democratic Party Platform to “specifically call out and address the needs of Black children and students as it relates to birth and beyond, school funding and closing yawning achievement gaps.”

The CDP Black Caucus said through its official statement to Party delegates, “Black students are subjected to harsh and disproportionate disciplinary actions. In addition, rising incidents of overt racism directed toward Black students in our schools are frequently the subject of news reports throughout California.” Calling these conditions “unacceptable,” the CDP Black Caucus demands for change were met by Democratic Party delegates voting to approve platform language to address their concerns head-on.

“We are very concerned, as all Democrats who care about Black children should be, that our schools leave over two-thirds of Black children unable to read or write at grade level. Nearly 80% are below grade level in math, and 86% are falling below science standards,” the Black Caucus wrote.

The shift in the education plank of the 2022 Democratic Party Platform is consistent with a change in public sentiment in which there is renewed focus on meeting the specific needs of Black students. The changing tides are brought on by the racial reckoning in America after the police killing of George Floyd and the growing frustration of parents during pandemic-related school closures.

“One of our core values is to educate,” said Calvin Harrell, President, Community Democratic Club — one of the largest Democratic Clubs in Solano County. “We are proud to have been a part of the groups advocating for these important changes in the California Democratic Party Platform. This is a critical time to use our voices and push to make the necessary changes needed.”

The CDP Black Caucus was recognized by party officials at the state convention for its participation in a fair, public, and transparent process facilitated by the CDP Platform Committee to advocate for these important changes. In the lead up to the March 4-6, 2022 State Democratic Convention, the Platform Committee facilitated an inclusive months-long process that began in the summer of 2021. The process was public and open to all Democrats. The CDP Black Caucus, participated in six hearings and had a diverse coalition of people representing various civil rights organizations, Democratic Clubs, delegates, central committee members, and Democrats from across California, most of them parents.

“The National Action Network has a longstanding commitment to ensuring equity in education in our nation and throughout the state of California. These important additions to the platform will help ensure we move towards high student achievement for all, particularly Black students,” said Reverend Darryl Scarbrough, President NAN Sacramento.

The California Democratic Black Caucus pledged to continue to fight for safe and culturally affirming educational environments that are free from overt and systemic racism. For more information on the work of the Black Caucus visit the website at https://cdpblackcaucus.org.

EDITOR’S NOTE: Dr. Margaret Fortune is the President/CEO of Fortune School, a system of nine, K-12 public charter schools with over 2,300 students focused on closing the Black achievement gap by preparing students for college.  She is a State Delegate on the California Democratic Party (CDP) State Central Committee where she also is an elected member of the Executive Board of the CDP Black Caucus. Fortune is Treasurer of National Action Network (NAN) Sacramento and has been an education advisor to two California Governors.  She is a graduate of the UC Berkeley and Harvard University, Kennedy School of Government. 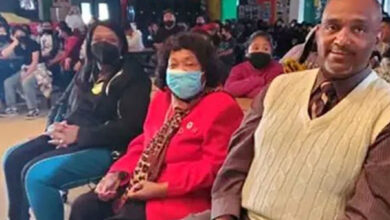