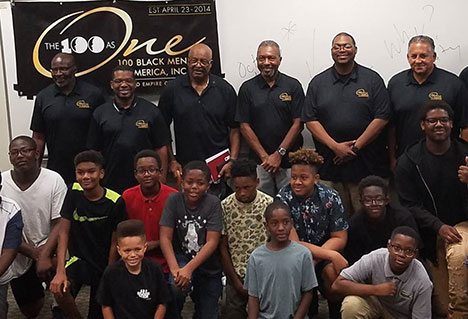 Keith Willis, incoming 100 BMIE president, said that he and the other volunteer mentors were taking late night calls from their boys, talking up and tweaking speeches until the last minute.

“They are very involved, very excited about the showcase. I’ve been on the phone, and they’ve been practicing,” he said.

The program, in partnership with the Pomona chapter Jack and Jill of America and the 100 BMIE Education Committee, helped the youth develop their presentations around some of the most significant civil rights heroes throughout Black history.

He said that “the 100” has been focused on outreach and broadening their students’ exposure to get out of the area to social events. They have been especially excited to collaborate with the Boy Scouts of America and in December, they took the boys to a leadership camp where they participated in a team-building exercise.

It was important to give students an opportunity that they wouldn’t ordinarily get in in the Inland Empire, he said.

The boys and youth also attended a young men’s conference sponsored by Jewett Walker, Div. President and Chairman of the Board of the 100 Black Men of Los Angeles.

“There were over 500 students there. It was an opportunity for our students to meet up with Los Angeles students and discuss issues that relate to growing up in America, in the climate that we have today. It was a very good exercise,” he said.

The organization provides strong academic support, but they especially want the boys grounded in a sense of self, with the cultural and social support they need for college success.

“It’s very important that students not feel like college is a foreign concept,” Willis said. “We want them to feel comfortable on campus, with various campus cultures so they can examine what is a good fit for them academically.”

Prior to coming on as president, Willis chaired the education committee, where his pet project was jump-starting the pilot program for the Saturday Academy at Cal Baptist University.

Their mentoring program at Chemawa Middle School, part of the Riverside Unified School District, is now in its second successful year. This week, in partnership with CBU, they are taking the middle school students out to the ball game for another fun day with higher education strategies hidden in the mix.

“It’s for a slice of college life,” he said. “We are also looking forward to building up a collaboration with University of California, Riverside, and the Black Student Union there to work on programs together.”

Willis said that he joined “the 100” because he was seeking a way to academically impact youth, which is part of the mission of the organization.  Initially, he served on the mentoring committee with Chemawa Middle School, eventually transitioning into the Saturday Academy.

“I came, and I was immediately enamored because it was exactly what I wanted to do,” said Willis, formerly a social studies teacher, and now an attorney. “We’re able to provide support, and a consistent presence of mentoring there.”

As students aged out of the middle school, the organization piloted a program with CBU, which encompasses some students from area high schools. All those attending wear their signature 100 Black Men of the Inland Empire shirt and khaki pants for their regular bi-monthly meetings. Currently, they have about 30 regular students aged 12 to 18.

In the coming weeks, the organization is also pushing community support for its April 20 Annual Gulf Tournament fundraiser to help keep the local programming strong for the kids.

Much of the energy in recent years has been in getting their bearings as a new organization, and developing programs that are a good fit for the local boys.  But the students who tend to be more involved also have strong parental support, he said. They make sure the boys come out to the meetings at the CBU campus.

As they’ve grown in the program, their boys and youth have developed persistence and staying power.  One student recently missed a class, and he was clearly upset about it.

“Once they go consistently, they want to keep going. It’s really been a positive experience,” he said.

For more information on the golf tournament or to get involved, email 100bmie@gmail.com