The city of Phoenix Youth and Education Office is currently seeking passionate and committed individuals interested in advising the Mayor, City Council and city management on how to enhance educational strategies and positive youth development approaches within city programs and the community.

The Youth and Education Commission is comprised of no more than 17 members from local businesses, youth-serving organizations, secondary/postsecondary institutions and the Arizona Department of Education.  The goals of the commission include:

The Youth and Education Office is also seeking youth from each council district to be part of the commission to assist in advising the city on opportunities and challenges related to youth.

Commissioners meet a minimum of once per quarter. For more information or to complete an application, visit phoenix.gov/education.

This article originally appeared in The Arizona Informant.

“We are here to recognize our brothers and sisters who are truly national leaders and who stand for freedom, justice and equality not when its popular, but when it’s not so popular to be freedom fighters,” said NNPA President/CEO Dr. Benjamin F. Chavis Jr.

In her typical fiery but still eloquent way, Waters spoke passionately about she and other Democrats’ mission to impeach President Donald Trump—though, like all of the recipients, she never mentioned the president by name only referring to him as ‘Number 45.’

“My friend Jesse Jackson said if you fight, you can win. If you don’t fight, you will never know if you can win,” said Waters, who also took time to heap praise upon NNPA National Chairman Dorothy R. Leavell, the publisher of the Crusader newspapers in Gary, Indiana and Chicago.

For those who insist that Vice President Mike Pence might turn out as a worse Commander in Chief than Trump, Waters scoffed: “I say knock off the first, and go after the second,” she said, as the sold-out crowd inside the grand ballroom of the Marriott Marquis roared its approval of her fiery award acceptance speech.

Green, the veteran civil rights advocate who’s serving his seventh term in Congress, picked up where Waters left off. “I promise that I have not given up on impeachment,” Green said. “We have a president who is not only unfit for the presidency, but a man who is unfit for any office in the United States of America.”

Clyburn, who arrived in Congress in 1993 and is the third-ranking Democrat, followed his colleagues and helped to drive home their impeachment argument. “I learned early what it means to challenge the system. I learned from my dad what it means to have the power of the almighty vote,” Clyburn said. “If the [midterm] election goes the way it seems like it is, you will have the best years of your lives going forward.”

Waters, Green and Clyburn were among the nine national leaders and activists honored by the NNPA on Friday, Sept. 14. A trade organization representing America’s more than 220 African American-owned newspapers—with more than 22 million weekly subscribers, the NNPA began the Leadership Awards in 2014. The awards honor individuals who are national leaders in their specific fields and whose actions have helped to improve the quality of life for African Americans and others.

The producers of the NNPA Leadership Awards Reception decided that the best time to host such an awards reception would be during the Congressional Black Caucus Foundation’s Annual Legislative Conference, a weeklong event that’s held each September.

The CBC ALC week is the largest annual gathering of its kind in the United States, featuring 15,000 to 20,000 African American leaders and influencers.

The underlying combined objective of the CBC ALC and the NNPA National Leadership Awards Reception is to network, collaborate and strategize collectively for the advancement and empowerment of Black America.

At 97, Wooten is the longest continuously serving poll worker in America. Immediately upon graduating from Princeton High School in 1939, Wooten was recruited to work the polls by her great uncle, Anderson Mitnaul, who was running for Justice of the Peace. More than seven decades later, Wooten is still working the polls and her 79-year streak remains intact.

“Voting is important,” Wooten told the audience who saluted her with a prolonged standing ovation. “We need to engage young people to get out to vote. I hope we can do better this year. On November 6, get out and vote,” she said. 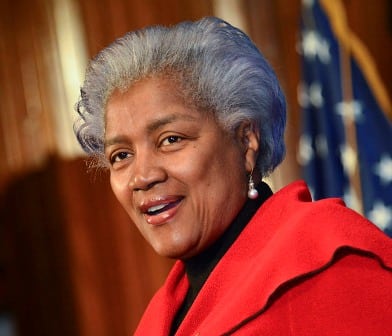 Donna Brazile Keynotes the State of the Black Press in 2018

Political analyst and author Donna Brazile delivered a stirring address about the “State of the Black Press in 2018” at the National Press Club in Washington, D.C., capping off the National Newspaper Publishers Association’s (NNPA) annual Black Press Week.

The NNPA is a trade group that represents more than 200 Black-owned media companies operating in the United States. NNPA member publications reach more than 20 million readers in print and online every week.

“I’ve known Donna Brazile for about 40 years and, in 2016, the Democrats couldn’t have selected a better person to lead them,” said Dr. Benjamin F. Chavis, Jr., the president and CEO of the NNPA.

Brazile, the veteran political strategist and former chair of the Democratic National Committee, said that the Black Press is the “pulse of the community.”

“You are carving out stories that the mainstream [media] won’t. You’ve been at the forefront of change, even before change was in vogue,” Brazil said. “That’s why I’ve always supported the Black Press.”

Brazile said she’s walked in and out of many campaign headquarters with a simple, yet critical question for those seeking political office: “Have you engaged the Black Press?”

She recalled working for Michael Dukakis during his failed 1988 presidential campaign against George H.W. Bush.

When she realized the former Massachusetts governor had not spoken with or taking out any advertisements in the Black Press, she stopped working for him.

“I went on strike,” said Brazile, adding that Dukakis told her that he was advised that “it was a waste of money to advertise in the Black Press.”

“I said, ‘Oh, you’ve won this race? You don’t need the Congressional Black Caucus, you don’t need the Black Press?” said Brazile; she convinced Dukakis of the importance of engaging African American-owned media.

“They wound up spending $10,000 with the Black Press…a pittance,” she said. Bush handily defeated Dukakis and Brazile said that the 2016 election proved a repeat of Dukakis’ error. “It’s the same type of thinking that cost Hillary Clinton the election. Had they invested [in advertising in the Black Press]—out of the billions they spent—we would be in this room celebrating.”

Chavis said that if the Democratic Party had listened to Brazile, they could have won.

This year, Chavis said that the NNPA will lead a massive voter registration drive to add 5 million, new Black voters to the rolls.

“This is our payback year!” Chavis said.

Dorothy Leavell, the chairman of the NNPA, said that Brazile spent her career advocating for the Black Press and working to help people understand the value of the Black Press.

“[Donna] has run some of the most influential campaigns, including Reverend Jesse Jackson’s historical presidential campaign and we could never really repay her for the services she’s given to the Black Press,” Leavell said.

The best-selling author of “Hacks: The Inside Story of the Break-Ins and Breakdowns that Put Donald Trump in the White House,” Brazile has devoted her life to working for progressive change, responsible governance, and the advancement of all people in a society that’s fair and equitable, according to her biography.

“This is another moment in our journey for equality for all,” Brazile said. “[The Black Press] should not be marginalized. You’ve been instrumental and vital, and you understand what’s at stake.”

Brazile continued: “You’re making sure untold stories find themselves in your newspapers and this is a moment when our story needs to be told. We’ve come a long way and we need your coverage. We especially need the Black Press, now during this crisis.”