Once students reach middle school, parents often become less engaged with their child’s academic environment. They don’t walk them in the school’s doors anymore, they don’t communicate as often with teachers, and they are less like to visit the school unless there is a special program or sporting event after hours. This is especially true for African American parents.

As a former classroom teacher in an urban, predominantly Black school, I have first-hand knowledge of this. During middle school, school becomes more or less a mystery to parents. However, under Every Student Succeeds Act, there is a push for parents to be more involved with academic environment of their child.

Studies show that when parents are more actively involved in their child’s schools, the child tends to perform better academically. Therefore, parental engagement is an important concept of discussion in terms of African American children’s performance.

Although parental engagement has a strong correlation to student academic performance and achievement, why is it that African American parents appear disproportionately less engaged than parents of other races?

Studies have shown that there are many factors that may hinder Black parents from being active in their child’s schooling. Factors include lacking confidence when speaking to education professionals or fear of seeming incompetent, being the sole provider in the household with work hours that conflict with school hours, and not knowing how to approach school officials with proper questions specific to individual child concerns.

These and many other nuisances keep Black parents from approaching schools to be more active in their child’s academic career. Nevertheless, for the sake of maximum student success and potential, it is important that parents are actively engaged in their child’s schooling.

It is imperative that Black parents are not only involved but also engaged in their child’s schools. Parents must not only be involved through participating in school-planned functions, but they must also create their own spaces and opportunities for active engagement to demystify student performance. There are many ways to do so, which include:

Regardless, of the age or grade of a parent’s child, parents have a right to know about the current happenings of the classroom and school. However, the school and parent relationship shouldn’t be one-sided with school doing all of the work in terms of providing the opportunities for parents to become engaged. Parents must understand the importance of their involvement in their child’s educational trajectory, take the reins, and create their opportunities for being actively involved.

Although, middle school is the time when most parents become less engaged in the child’s school, it should be a time when parents maintain engagement. To demystify further, parent involvement weighs heavily on children’s performance. And simply put, children need to see parents in their academic spaces for better performance, even in middle school and beyond.

We’re all familiar with the popular proverb, “It takes a village to raise a child.” As a 21st century society, this still holds true, literally and figuratively. For non-millennials, who grew up in a vastly different era, there is a nostalgic mindset that a diverse community of inspiring people interacting with children has a positive and sustained life-changing impact on their development. By no means should this mean the village is responsible for raising your children, but we all have a stake in their development and success.

Rajoielle “Raj” Register says that In order to awaken dreams and inspire the next generation of innovators, problem-solvers and leaders, it’s imperative to expose children to STEAM at an early age. (Ford Motor Company)

Early exposure to career choices are often the first step in the “What do I want to be when I grow up?” conversation. Although definitive decisions won’t be made for years to come, dreams and thoughts about future careers begin early. Whether policeman, fireman, truck driver, doctor, dentist, teacher, musician, sports star, and/or whatever it is their parents and relatives do, most children are passively aware and relate to the limited pool of occupations to which they are exposed.

While teachers offer an impressionable climate for first-hand learnings and experiences, parents provide the most important impact and stimulus on a child’s early life. Early exposure to non-traditional learning environments not only creates a generation of new dreamers and thought leaders, but also provides them with an eye-opening and novel perspective on the limitless opportunities that is their future.

From elementary to middle school, efforts to prepare students for college and beyond are taking hold earlier than ever as a childhood surrounded by books, scholastic support and diverse role models leave permanent impressions on a young person’s mind well into their late teens. That’s why early exposure to science, technology, engineering, arts and mathematics (STEAM) fields are especially important.

Reflected in its legacy history, American industry was built on innovation. To awaken dreams and inspire the next generation of innovators, problem-solvers and leaders, it’s imperative to expose children to STEAM at an early age. If engaged, receptive and they’ve developed an interest by eighth grade, they’re three times more likely to pursue careers in STEAM fields later in life.

STEAM careers are at the forefront of some of the fastest-growing industries. Conversely, they also have some of the largest gender gaps as women comprise only 26 percent of all science, tech, engineering and mathematics jobs. As they continue to grow, women are getting left behind.

Many young girls are turning away from STEAM careers during their developmental years and have completely opted out by high school. That must change and we, the village (with torches in hand), must step up to lead, advocate and champion that change.

For over three decades, the Ford Motor Company has been committed to supporting innovative initiatives that encourage and inspire young people to pursue and succeed in STEAM fields—a career path many, if not most, of today’s youth (especially African American youth) believe are out of reach for them.

Both within and outside the village, this is an important conversation that we must have as the future of our children is at stake. In addition to sponsorships, scholarships and aligning with synergy partners such as the National Newspaper Publishers Association (NNPA), Ford has demonstrated its commitment in a hands-on way, connecting with and supporting a host of STEM and STEAM focused initiatives including Girls Who Code, Tech Sassy Girlz, STEMinista project, Destination Imagination, School Retool, Michigan Technological University, Amphi Middle School’s Girl Power in Science & Engineering, FIRST® Robotics and #WomenInSTEAM, among others.

Here in the U.S. and around the world, women are severely underrepresented in STEAM fields—career fields that are expected to grow more than 9 million jobs by 2022. No surprise, both women and men are needed to fill those jobs and we, individually and collectively, must do our part to begin to narrow the gap, especially among African American youth.

For African American communities, integrating young women in science and technology begins with planting the seed at an early age, nurturing that seed to show the impossible is possible and, cultivating girls to become a part of those fields. Ever shifting, the formative and impressionable years between teen and young adult are a principal cause for why young girls are looking away from STEAM.

Whether parent, educator, leader, STEAM alum, or just someone who cares about the village and its children, you can play a role in supporting an up-and-coming generation of young girls interested and desirous to pursue a career in STEAM.

Let’s unite as one to stimulate, inspire and change a life. At the end of the day, we’re all stakeholders in the future and success of our children.

This commentary was originally published at BlackPressUSA.com. 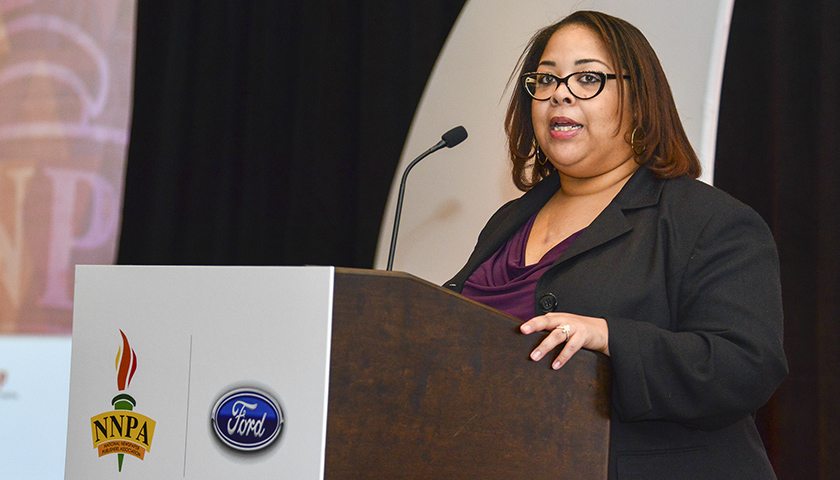 In an effort to encourage young people to pursue and succeed in STEAM careers (Science, Technology Engineering, the Arts and Mathematics), Ford announced a new quarterly column dedicated to showcasing opportunities in STEAM. The column will appear on BlackPressUSA.com and will be available to NNPA members through the NNPA Newswire.

The NNPA is a trade group that represents more than 200 Black-owned media companies, operating in the United States; the member publications reach more than 20 million readers, combined, in print and online every week.

The new column will begin in March.

“Rest assured, this will not be a self-serving platform,” said Renah Carlisle, a sales zone manager for Ford’s Phoenix Region. “Both Ford and the NNPA support STEAM initiatives and it is a reminder to our children, that the impossible is possible.”

This year, there will be more than 8 million jobs available in STEAM and the federal government alone will need an additional 10,000 workers for information technology and cybersecurity, Carlisle said.

“In tandem with other programs and initiatives, with the launch of this new STEAM column, we’re excited to not only put a focus on an important issue impacting our youth, but to also offer [another avenue] to increase awareness, consideration and participation in exciting, dynamic career opportunities available to all young people everywhere,” said Carlisle, in a press statement about the new STEAM column.

NNPA President and CEO Dr. Benjamin F. Chavis Jr., said that the NNPA was excited to join Ford in this important conversation about the future of our youth.

“Across the country, our members serve as the voice and advocate for the communities they serve,” said Chavis, in a press statement about the new STEAM column. “The unsettling fact that every 26 seconds a student drops out of high school should be impetus enough for leaders, mentors and all who care about the future of our youth to develop a pipeline for future leaders in STEAM careers.”

The statement continued: “Both NNPA and Ford share a mutual commitment and support for STEAM initiatives and are excited to support innovation, differentiation and opportunities that help our youth ‘Go Further’ in tech,” and explore the limitless potential of the future.