As a child, in between born into an interracial family, Poet Michele Reese knew she wanted to write about the Black experience with works that delved into African American history, from very early on.

She bared the words from her soul in front of a room full of young writers with her son sitting in the front row as she read from her first published book of poems, Following Phia, which indirectly focuses on her journey through life, sexuality, race, motherhood, and other topics.

“My home sits in sandy soil, where once indigo was caked in lye, I’ve painted my children’s walls haint blue to keep them safe from mosquitoes and restless spirits,” she said. “They have been fed from my breasts, bathed in tepid water to bring down fevers, inoculated, taught to swim… I have done all the things that mothers do to tether their children,” Reese read at Xavier University’s Fall Literary Reading series on Oct. 4th. 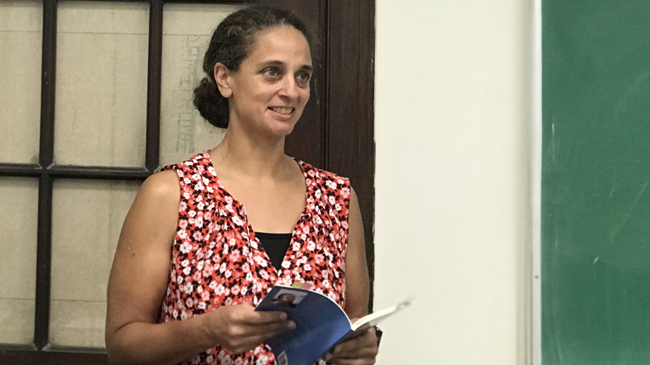 other writers. It was one of her own teachers in middle school that inspired her to pick up the pen and write what she was feeling, whether it was about what she ate that morning, or how she was feeling about rainy mornings in West Virginia. All she knew was that she had to write.

“It was my own English teacher in seventh grade that made me write a poem,” she said, “I’m pretty sure it was for an assignment, but I haven’t stopped writing ever since. I had no clue it would be paying my bills today,” Reese said.

As the daughter of a Jamaican Immigrant, Reese began to tell stories through her poetry that dealt with race, intersection, gender, sexuality, slavery, and much more. These very stories were things not just about slaves and their struggles, but also about her own Jamaican family heritage.

Although she grew up in West Virginia, a mostly White-populated state, Reese never lost sight of her Jamaican roots. She was determined to begin writing poetry that dealt with African-American history, symbolism, and culture. It helped her to connect with the Black experience.

“I am tired of being beneath him. I cannot wait to escape,” Reese read from one of her poems, discussing the rapes of African-American enslaved women.

Although these topics were not always so easy to discuss, read, or write about, that did not stop her from writing about them. These were messages she believed needed to be talked about, especially ones about race and gender. She felt drawn to these topics because of the Jamaican blood running through her veins.

As a way to branch out and get away from West Virginia, the poet went to the University of Southern California where she earned a bachelor’s degree in creative writing/poetry and print journalism in 1994. She then went on to graduate school and then earned her doctorate in 2000. The poet’s latest work, Following Phia, was published earlier this year and focuses on the journey of her life, both spiritually and intellectually. Reese discusses her travels, her love of being a mother, her heritage, and much more throughout the book.

“As the child of an immigrant, a Jamaican Immigrant at that, race was something I really wanted to tackle in my writing,” Reese said. She often wished she had poems that were light-hearted, and a little less serious, but she never stopped writing them because she knew the Black experience is never an easy subject. She wanted her readers to really connect with the struggles and the joys of being Black.

“I wish I had some more funny poems,” Reese said. “But a poet named Pat Parker wrote a powerful piece titled, “Where Would I Be,” and that kind of made me realize we have to have the courage to stand up for what we believe in and as a writer I think that’s very important,” she said.

Some of Reese’s poems have been published in several journals like The Oklahoma Review, Poetry Midwest, The Tulane Review, and Hand in Hand: Poets among others. She also is a former writer for The Watering Hole. The organization, founded by Candace G. Wiley, a Clemson University Professor in 2009, first started off as a small Facebook group. Since then, it has attracted dozens of members and their writers have earned numerous awards.

As a writer, there is a very slim chance your work will get published, Reese said, because someone must find it and fall in love with it. “If you are a writer, even if you just started, do not give up. Believe in yourself and in your writing, even if no one else does,” Reese said. “Continue telling those stories that people are afraid to tell because they deserve to be heard. Just like news reporters, poets tell stories,” she added.

Young writers like David Evans, a Xavier student, said that as a frequent writer himself, he couldn’t help but feel touched not only by Reese’s work, but by her sincerity as a writer.

“You can tell her writing comes from a place of realness,” Evans said. “As a writer, I felt the urge to pick my pencil up and start writing those things I’m so scared to write about because we all have a voice, even through ink and paper.”

He said he is grateful that Reese took the time to inspire another generation of writers with her story. “Writing has no limits. It is all about what you feel and sometimes even about what you have been through,” he said. Young Black writers don’t always get to see themselves in poetry, according to Biljana Obradovic, the English Department Head at Xavier. She wanted her students to have more knowledge on how to publish their work and to be exposed to different types of work. Not only did Reese come and just share her work, she gave aspiring writers an even greater message to leave with: To believe in themselves, their voice, and in their writing, “She is an amazing writer because her writing is sincere,” said Obramovic who met Reese six years ago during a teaching trip to Italy.

“Her writing speaks to the soul, and her writing speaks for a lot of minorities with similar views, similar heritage and those who have faced similar adversities. I am able to teach students that come from all over the world, and at an HBCU, I think it is so important for students in general to use their voice,” Obradovic said. 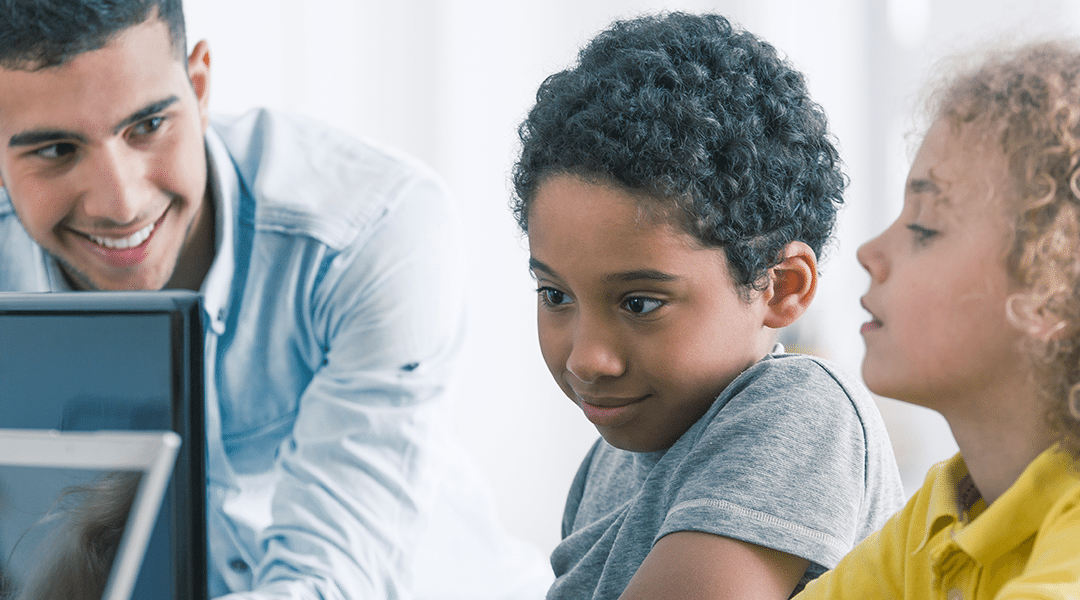 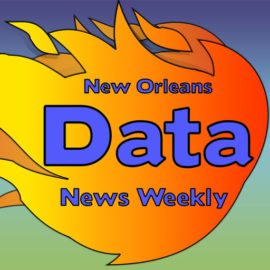 Public school systems throughout the nation will now be required to be a lot more transparent when it comes to school funding.

According to the federal Every Student Succeeds Act (ESSA), signed into law by President Barack Obama in 2015, all public schools nationwide, will be required to give fully-detailed reports on how and where they spend institutional funding.

The ESSA reporting requirement for school funding begins in December 2019, and supporters of the rule, including the NAACP, believe it will help to encourage greater educational equity, particularly among schools serving large numbers of Black and Hispanic students in low-income neighborhoods.

“We need more equitable and adequate funding for all schools serving students of color,” said Victor Goode, the education director for the NAACP. “Why? Because education funding has been inadequate and unequal for students of color for hundreds of years. Second, privatization forces are working to eliminate our public schools and, with it, transparency, public accountability and access to all.”

Goode said that ESSA requires a breakdown of how student need is met with a focus on equity over equal distribution for funding.

Goode continued: “That explains the reason behind the school-by-school, per pupil spending report. This kind of public transparency is a good thing and can help provide more meaningful parental and community engagement, which is also essential to accountability and achieving educational equity.”

According to the Brookings Institution, a nonprofit public policy organization, based in Washington, D.C., that conducts research on solving societal problems locally, nationwide and globally, to date minority students are still far more less likely than White students to have adequate school resources.

In addition, the Brookings Institution reported that schools with predominantly Black and Hispanic children, on average, are nearly twice as large as White schools—reaching an estimated 3,000 students or more in most cities, with lower-quality curriculum offerings and less qualified teachers (in terms of levels of education, certification, and training in the fields they teach), all of which George H. Lambert, Jr., president and CEO of the Greater Washington Urban League, believes can be rectified through adequate funding.

“Through the availability of [ESSA] data, Black and [Hispanic] educators can begin to prove that Black and [Hispanic] students suffer from funding disparities and the lack of teachers in the classroom who look like them or represent their perspective,” Lambert said. “We need better, more transparent data on school funding. The availability of such data and our ability to access it forces greater urgency on what is, arguably the most important issue of our time.”

Lambert said that any discussion on educational equity should acknowledge the enormous achievement gaps that still plague Black and Hispanic students.

“If these gaps aren’t closed, our community doesn’t have much of a future,” Lambert said.” Even though high school graduation rates are better now than 30 years ago, we still face a situation where more than a quarter of Black students, for example, are dropping out. Most Black students in the largest U.S. cities are attending schools with high concentrations of poverty. Over half of our young, Black men are either dropping out or finishing K-12 late, hence 1 in 3 end up trapped in some fashion in the criminal justice system.”

Despite high approval from many civil rights organizations, school district administrators, like Robert Lowry, the deputy director of the New York State Council of School Superintendents still believe that the new law might shine light on imbalanced revenue and create the perception that some students are being shortchanged, even when this may not be the case.

“We question whether the state officials would even have the expertise and the capacity to evaluate spending levels between schools,” Lowry told Education Week.

Though Lowry’s concerns may be valid, Lambert believes that full transparency is a plus.

“This is a good way to learn about flaws in the system and how those flaws are aggravated by a lack of Black and [Hispanic] expertise and perspective in the curriculum, the classroom and the leadership office,” Lambert said. “We can also find out if school districts with a larger number of Black and [Hispanic] educators are experiencing high levels of funding disparities and uneven attention from policymakers.”